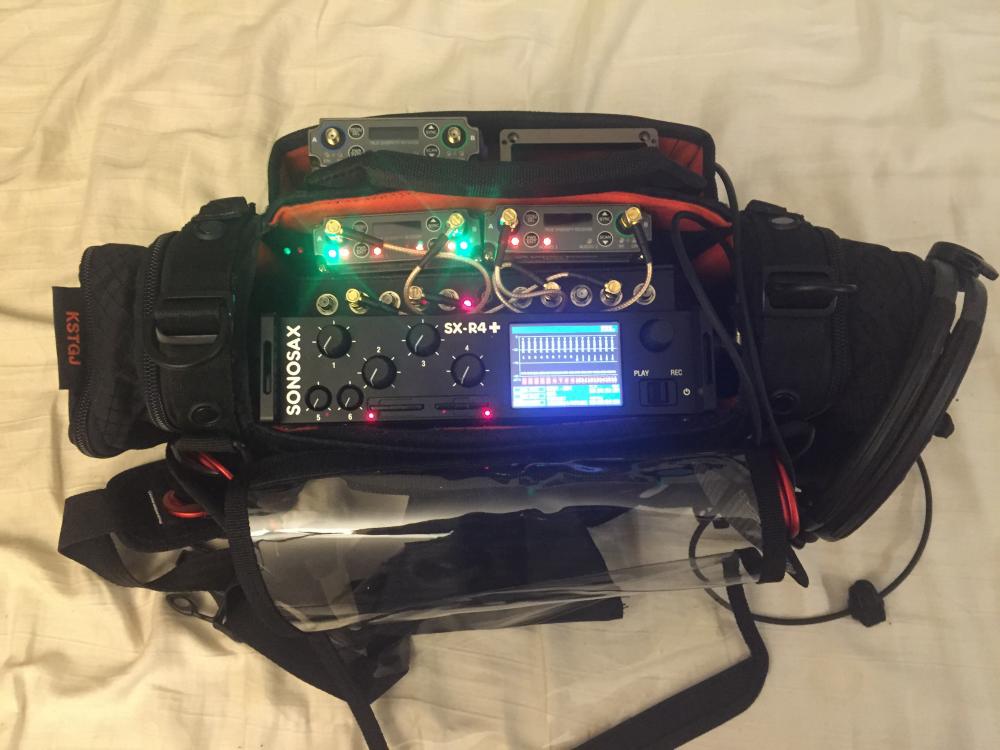 Being an ‘Early Adopter’ is usually a thing I don’t do and warn others away from, especially with products which are heavily software based, however I’ve been a user of the SX-R4 /SX-M32 for some time and have struggled to find another solution which has been able to do quite as much with a similar footprint and weight (despite the numerous workarounds and bodges in my current rig) and have the sound quality I’ve grown accustomed to.  When they offered a discount for pre-orders of the machine I put a deposit down.  Think of this as an ‘initial’ review.  I expect there’s a lot more to come from this machine and the modular system based around it.

The SX-R4+ has been out on 3 separate jobs now, all fairly straightforward corporate /online type things.  It was spared from a trip to Kosovo as it arrived the morning I flew out.

At a first glance the front of the machine and user interface looks pretty bare.  However,  it has a touchscreen interface, I was a bit sceptical about this until I’d used it (especially for a machine this size, it’s only marginally bigger than the SX-R4).  For most menu functions, the screen’s effectively separated into a grid of 9 buttons- all big enough for fingers and there’s a knob to change parameter values.  The menus seem well layered, nothing’s more than 3 layers down.  This allows much faster navigation through menus than on recorders without a touchscreen.   On the main screen there are 3 shortcut sections at the bottom, one to the power menu, one to quickly change scene/slate/take and one to the main menu.  Ideally I’d like a faster way to to the metadata notes screen too, but that’s one click on the web server screen.  Faster hard pan control would also be beneficial.

To add to that, it has a wifi interface which other devices can join or, alternatively it can join a network.  It doesn’t require an app, just a browser window as the machine runs the interface through a web server.  Currently it’s possible to view meters, arm and disarm tracks and add metadata, while almost all parameters on the machine are viewable.  This adds further ease of use to the machine and there’s no reason why a keyboard couldn’t be plugged into your tablet/phone/computer (although there’s no native keyboard port).  Although it’s a small device, it can ‘get big’- there’s no reason why it couldn’t be used effectively for trolley based work with either a mixer in front or with the upcoming control surface.

Next, what does it sound like?  Lovely. Through the headphone amp, there’s definitely an extra level of cleanness compared to the original R4 and Sound Devices 6 series, this may be just an improvement to the headphone amp, though.  However, it does have an extended dynamic range, due to some kind of dual ADC witchery to give something like 135dB(A) dynamic range- effectively your recordings should be clean without adding any gain to your mics whatsoever (although productions may not understand/like this).  I’m not sure my ears can manage that- it’s from nothing to practically being behind a jet engine and possibly more than any microphone can manage.   There’s some sort of patent wrangling in the US going on with zaxcom’s neverclip which seems to be similar technology meaning the R4+ won’t be sold in the US at this time.

Input-wise it can also take 10 channels of AES3 digital inputs (4 of which can be dual AES42 digial microphone inputs if going though the XLR connectors), 4 microphone inputs and 2 balanced line level.  Using the AES3 inputs make a real difference to the noise floor on the outputs on my Wisycom MCR42 receivers.  All the digital inputs use asynchronous sample rate converters, so clocking is not required.  When switching between analogue and digital on the XLRs, you can hear the mechanical click of a switch inside the machine (in your ears, rather than headphones).  It’s quite satisfying, and I can’t imagine you doing that whilst rolling.  The mechanical record/playback switch is also satisfying, but I think the original R4’s is slightly larger and better.

Outputs are a bit of a sticking point with this machine, as it comes your only outputs (except headphones) are a 2 channel unbalanced output and a 2 channel AES3 output.  This actually worked out fine for a job feeding 2 amiras, with one on wireless but it will require an extra box to run balanced analogue, either an unbalanced-balanced converter or DAC.  There is an empty slot on the left ‘analogue’ side for either a 5pin 2 channel balanced output or RJ45 digital audio connector to run 16 channels I/O over dante, ravenna or AVB- this would really open up the machine to expansion and allow it to be used as a computer audio interface but would still require another box for camera feeds.  Both of these options are currently in development and expected by the end of the year.  Any inputs can be routed to any track or output.  There’s a matrix with each of the 16 tracks and inputs are assignable, while outputs have a 2 track matrix with each pair of channels assignable to either output channel.

The R4+ is a 16 channel recorder, which records to 2x SD cards located on the front at up to 192kHz.  I didn’t receive a cover for these as they’re currently being re-designed.  Sonosax weren’t happy with the initial batch so a new one should be on the way.  Personally I like the front access to the cards- it avoids ferreting around the sides/back with some pliers trying to pull out a CF card . Also the SD cards are considerably cheaper than CF.  A new development is that the R4+ formats the SD cards as UDF- which is the ‘dvd writing format’.  This means file headers are written at the start and the data is added sequentially- if there’s any interruption to recording, say a loss of power then the files stay intact and won’t be lost as a header hasn’t been written.

The power management on the R4+ takes another step up from many other recorders available.  It uses ‘2054’ shape Inspired Energy/RRC/audioroot batteries internally with a runtime of over 8 hours with the machine as-is, and running a RF distributor and 2 wisycom receivers just under 5 hours on one 48W/hr battery.  You can tell this from the smbus interface with the battery- detailed current draw, how many charge cycles the battery has done and accurate runtime are all viewable.  Battery warning alarms can be set at whatever time you like.  It also has a 12V regulated output, and 7W can be drawn from this- this is switchable so peripherals can be turned off through the menu.  There’s also an hot-swappable external DC input which will also receive smbus data over pins 3 and 4 (check your wiring in case DC is going through those pins!).

Finally, the 4 main controller knobs.  First, the good news- these are connected to the DSP and control the ADC input levels of the inputs to each of the 4 corresponding XLRs. Also, the fact they’re offset from each other makes it easier to identify channels without looking. They’re very smooth and totally free of ‘zipper’ noise; sensitivity, gain ranges and whether the knobs mute at zero can all be selected through menu options.  They also have a button which is activated when they are pushed in (this can also be programmed to do number of functions- including something else on a ‘long’ press, although PFL seems to be the most useful).  The issue that they’re currently ‘locked’ to input gain on each XLR, is however an issue at the moment- this means it’s only possible to record post-fader iso tracks, and that each AES3 pair is automatically ganged to one fader, so in AES3 output mode my receivers are effecitively single channel.  This is one of a number of issues which are due to be fixed in the next firmware update, however.  The faders for inputs 5 and 6 correspond only to the analogue line inputs and are pre-adc potentiometers, so if used as faders the iso tracks will be ‘post fade’ (and this can’t be changed in software).

The final missing feature is dedicated comms sends.  I think it’s something Sonosax want to keep for their bigger mixers, however this machine does have plenty of tracks and it certainly has the DSP power to route a mic input to a number of destinations (possibly through programming some of the buttons).  It could also be possible using an external analogue mic switch or through a third party dante/ravenna/AVB compatible box.

In conclusion,  it’s small, this is a very powerful machine, which sounds fantastic and has an excellent user interface.  It should also get very expandable later in the year when the additional mic preamp box, control surface and option cards become available.  There’s also buckets of DSP horsepower in there yet to be used, so it’s still early days on software capability.  However there are a few missing pieces at the moment, which should hopefully be sorted very soon.

For further information, see sonosax.ch and the IPS have a detailed interview with Pierre Blanc from Sonosax about the machine here