Earlier this year I made a post about the theoretical use of audio interfaces as digital mixers.  Since then I’ve got some toys and the experiments have begun:

I ended up getting a good deal on 2 of these interfaces.  They each have 8 channels of AES3 audio in and out with sample rate conversion, although some of the connections are 75ohm RCA for consumer SP/DIF.   They are also happy with a variable voltage range and are happy with reversed polarity on the DC input (even though the plug says 15V centre positive).  The AVB connection allows them to link together and address multiple channels from one interface, essentially making a modular interface with all sorts of connections.  Together they have 16 inputs and outputs.

I started off here running a Keith McMillen K-Mix, however it just runs standard midi control change and note outputs.  These are easy to deal with and re-route, however I came across some issues with resolution which were solved by using a control surface that runs the Mackie Control Universal protocol (MCU).  The cheapest one I could find was an iCon Platform M.

The problem with the MOTU interfaces in this instance was that they used a nice control protocol for computers to talk to each other, but not control surface hardware- they’re designed the interface with the view that it’s used on an ipad or similar.  They use Open Sound Control to communicate (documentation here), so there needs to be a way of converting midi commands to this.  It’s also one way- the interface doesn’t send any data back.  So, I needed a way of translating midi commands to OSC.

After looking at a few solutions, and realising I can’t program properly- it dawned on me that I could use Pure Data.  It’s an open source graphical programming language (similar to the proprietary Max/MSP) and I’d used it before on various music performance projects.  It would also run on a raspberry pi– so could have a low power dedicated computer to do the translation work.  I found it was actually pretty straightforward to get the midi in and the OSC out, however came across a few snags… 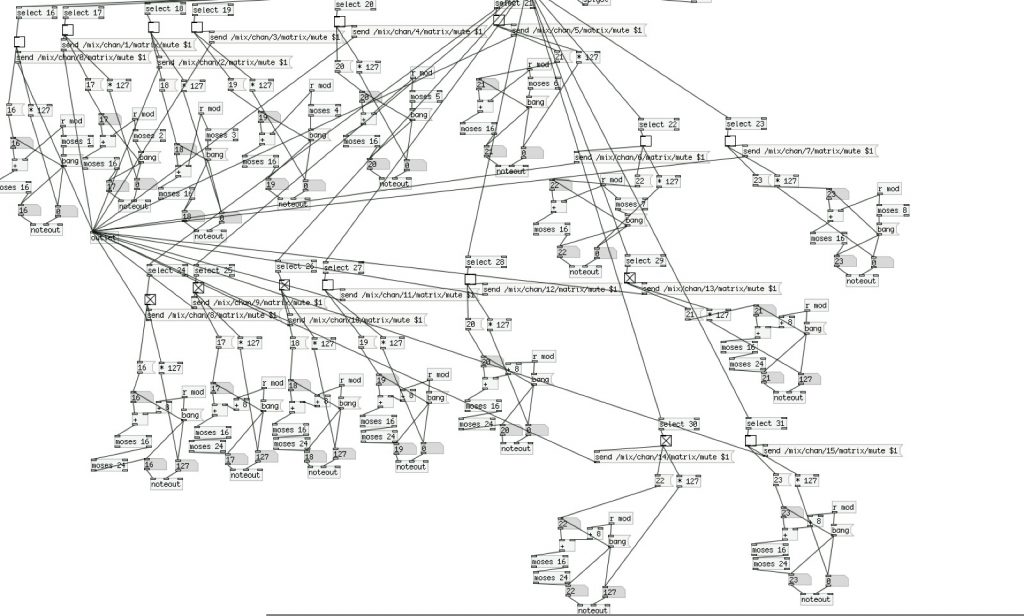 This is one of those terms where everything gets confusing.  Yes, linear faders can mean they’re in a straight line- rather than rotary faders, which you turn.  The potentiometers, however need to be logarithmic- every 3dB of attenuation is a halving of voltage.  In most midi applications this would normally be done at the software end, but here it’s just a number being fed in.  In order to do this a bit of mathematical transformation of the data was required and the higher resolution of the faders really helped in MCU (they’re used as pitch bend controls on each channel).

In order to run 16 channels from an 8 channel controller I decided (possibly foolishly) to create a second layer on the PD patch and send back data to the control surface.  It works, however the mute and solo buttons unexpectedly turned out to be a headache!

I had a look and I couldn’t find and DC powered interfaces with a Dante connection and a mix engine.  Best option I can think of is to use a MADI interface (such as a MOTU M64 or RME Madiface Pro) and a Directout Exbox.md or Ferrofish Verto series converter

If you want to have a go with it, please feel free to get in touch.  I can’t offer any kind of warranty or technical support at the moment- it’s just a thing I made.  It should hopefully work with any of the Motu AVB interfaces and midi controllers with MCU emulation.  It requires pd-extended 0.43-4 to run

I don’t normally do reviews per-se, but I thought this was a particularly useful bit of equipment and it may not be obvious at first glance why the Radial Catapult is so useful. So much so, I didn’t realise its usefulness until buying the wrong boxes…

I initially bought just the standard TX and RX boxes which don’t have any transformers.  After doing some work making my own analogue to CAT5 adapters before,  I found they weren’t rugged enough.  Also I’d found that the Neutrik CAT6 connectors weren’t compatible with their standard ethercon connectors.  These were obviously well made in pretty chunky steel cases.  As CAT5 is 100ohm, it’s also ‘close enough for jazz’ to 110ohm and is able to run long distance AES3 digital signals. 48V phantom power can be provided as long as shielded CAT5 cable is used.

They also have the advantage of working like a  4 way ‘Y cable’ providing a passive split of the signal.  As most of my kit is battery powered a lot of the time, I didn’t see a need to get the transformer versions.  Everything in them is wired in parallel, so the same signals are split across both XLR connectors opposite from one another and the same signal comes out of both CAT5 sockets.  There’s also all passive boxes, so no power supplies are needed, however any splits will incur a 3dB loss in signal.

Transformers: More than meets the eye

There are multiple different versions of the Catapult, with transformers optimised for mic (ending with an ‘M’) and line level (ending with an ‘L’) signals.  They way they’re arranged is to isolate the 2 sides of the catapult box, but could also be used to interface unbalanced signals from things like laptops.

Something I can think of a very good use for them is for running out comms feeds to set.  Typically we use small battery powered ‘beltpack’ TX for this, which only have an unbalanced input.  Here you could put in a long run along one CAT5 cable without worrying about interference on the audio getting to the comms transmitter.

Another approach is to use a ‘plug on’ transmitter designed for balanced microphone inputs.  However, it uses the cable shield as an antenna, and a 50m antenna is less than optimal for UHF. The transformer will break this up and a patch cord will have a better antenna length.

In this case, the TX4L would be the best box for this, plugging any microphones into the ‘input’ end and transmitters on the ‘splits’ of the other 2 channels on the other side of the transformers.  These could run to either a TX or RX box (although sex changers would have to be used with the RX to run the transmitters the ‘wrong way’ up the CAT5 cable)

CAT5 is for networking

Who said network audio had to be digital?  With multiple boxes it is possible to route signals to multiple locations using splits and the fact that dual CAT5 connections are on each box allows this.  The transformers can also help isolate different systems running form different power sources and they have ground lift switches to avoid ground loops (however this will mean you lose phantom power).  Do bear in mind the 3dB signal loss for each split, though- if you wanted to do something particularly complex it’d be worth getting amplifiers in to compensate.