Having both the mixer and recorder in one box has really become a standard these days for doco recording.  It’s quite easy to see why, it’s 2 boxes with the size and weight of one.  However, if something goes wrong with it you can be stuffed.  With my old rig, say if there was a problem with either the recorder or mixer it would be possible to either cable to camera and just use the mixer.  Or plug directly into the recorder and just record iso tracks.  Either way, if something bad happened to either box it’d be possible to get something.  If you’ve got one box handling all your mixing and recording and it goes wrong (and it’s a computer!) you need some kind of failsafe.

Since I bought the SX-R4+ I’ve been carrying this rig in the bottom of my bag.  This is partly because I’m only set up to send to camera over wireless or AES3 digital with the R4+ (currently waiting for the XLR5 option board) so it’s had a bit of use, still: 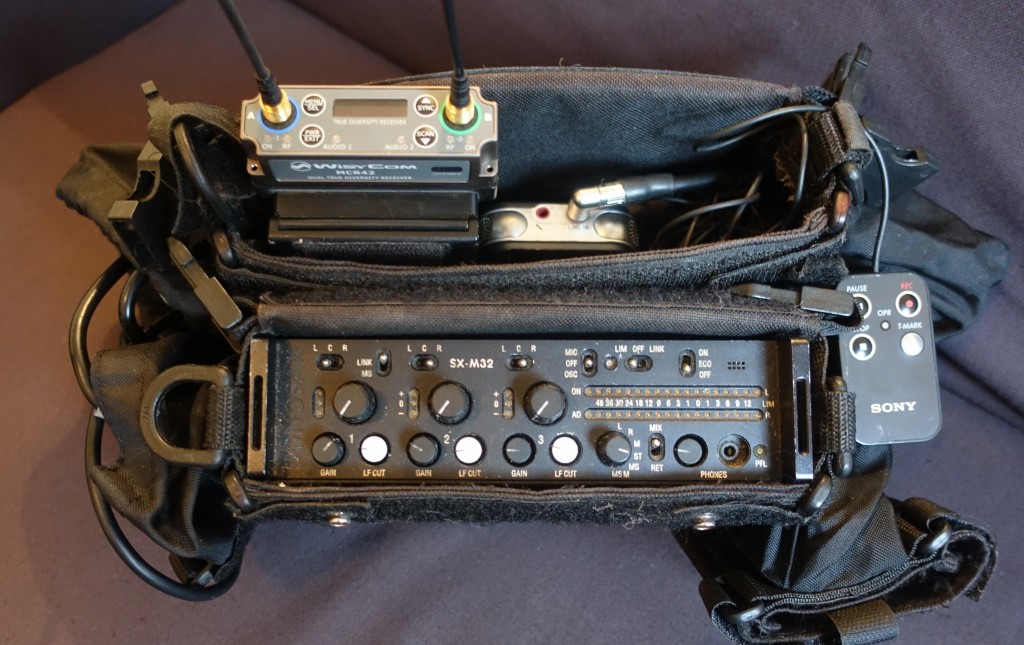 It’s a Sonosax SX-M32 3 channel mixer, Wisycom MCR42 dual channel radio receiver (with standalone back and AA battery compartment) and a Sony PCM-M10 recorder (with remote on the right).

All of it will work for a good 5-6 hours from AA batteries (the recorder runs for about 24!).  So say, I run out of Li-Ion rechargeables, or they’re held up in customs I can at least get a runner to buy a load of AAs from a shop.  I can run a boom and 2 radio mics and be cabled to camera or record independently (with no timecode).  Also a feature the PCM-M10 has which the SX-R4+ doesn’t is recording as MP3 (!).

Even when I do get the additional output options for the SX-R4+, I still think I’m going to carry this around, just in case…