A couple of months back I had a bit of a discussion with someone looking to put together some interviews and was after a small 3 channel mixer.  I just thought I’d put some of my thoughts together on what’s out there, which I’ve used.

Sound Devices 302
Solid workhorse mixer, really compact, practically indestuctible.  I’ve used quite a few of these and they sound clean and fine, although some other preamps have a bit more ‘niceness’ to them and a little less noise.  They sound the same as the mixpre, 552 and 442 so are certainly broadcast standard.  It’s also possible to feed an extra 2 channels to the mix bus on the return (minijack) and adjust them independently.  3 channel direct out is possible, but a bit of a bodge- send ch1 and ch2 to left and right, leave ch3 faded down and monitor it pre fade on the headphones.

Fostex FM3
I’m really surprised I haven’t seen more of these about.  I tried one when I went for the Sonosax and there wasn’t much in it preamp-wise.  It’s got more flexible outputs than the Sound Devices.  It’s got 2 pairs of balanced outputs, which can be set at different output levels and an aux out which sends 2 of the 3 channels (selectable), pre-fade.  Loads of the I/O are on full size XLR’s too (including a 2ch balanced Bus in)  Only thing which I found a let down was the “fake” digital VU meters, which I didn’t find easy to read.

Sonosax SX-M32
I went and bought one of these, mainly because of the sound, and that I could also use it as a high quality preamp pair for chamber music recording.  Good points- it sounds fantastic, both preamp-wise and on the input limiters.   The analogue to digital converter is also as good as some expensive studio boxes.  The layout’s great and it’s got loads of output options (I’ve got the direct out option’B’ with hirose 10pin).
Bad points:  It’s expensive, and some settings (like limiter threshold) have to be changed at the factory.  I’ve also had a couple of niggles with meters on mine.  I’m starting to suspect it may be because I’ve been running unregulated power to it, I’ve just got a regulated distro and it’s been fine since, but it’s been back to the factory twice now for a thorough check out (and Sonosax have been great with this).  The A/D converter also makes it maybe a bit greedier on power than some of the others (the Sound Devices will last longer on 3 AA batteries, compared to the Sonosax’s 6).

SQN 4S Mini
Here, instead of 3 channels- you get 4 in a similar sized box.  There is a small caveat though, channels 3 and 4 don’t have phantom power or as much gain as 1 & 2, so are oly really suitable for radio mics (I can’t think of may situations where they wouldn’t be used for that) .  Channels 1 and 2 are good though, bags of gain and great limiters.  There are also direct outs for all channels and and an umbilical connection on tajimi 10pin.  The ergonomics are a bit quirky (like all SQN’s) with switched gain and HPF controls on the bottom (along with most of the manual!) and pan assigns on the right hand side, but you get used to them pretty quickly.  Something I can’t see is any way of routing additional inputs to the mix bus though, so multiple mixers can’t be ganged.

AETA Mixy
I’ve never seen one of these in real life, and was certainly interested in it.  Unlike the others it’s a digital mixer, with 3x direct outs and digital in and out (including on optical and USB).  It also comes with a fixed internal battery, which I’m a bit less keen on- AA’s can really get you out of trouble and are available almost anywhere..  The umbilical output’s on a neutricon and is designed for wireless tx and rx (I think this is standard for French broadcast) and the pin out also has DC in and out, so you may be able to power a camera hop from the mixer- this is also an option on the Sonosax.

Future Stuff
There have been a couple of announcements of products to be released including Zaxcom’s Maxx which is a 4 channel digital mixer/recorder, with a option for a built in wireless transmitter.  Also Audio Developments have a small 3 channel mixer with 2 channel recorder coming out soon.  Fostex have the DC-R302 out already, which is a 3 channel mixer with 2 channel recorder, however it only has unbalanced outputs- making it awkward for straight to camera jobs (but perfect for DSLR ones).  There are also quite a few rumours floating around that Sound Devices may bring out a similar (sound) device…
Any of the mixers above can also be paired with a small, basic recorder (I use a Sony PCM-M10) for transcription or DSLR work without adding much weight or size.

After a couple of mentions from other soundies- I thought I’d make something to protect my windjammers, my old one’s got a bit squashed in the back of a backpack going to and from jobs.  So to protect it from knocks and keep its shape I thought putting it in some kind of tube could help.

I bought 1m of 4″ waste pipe for £10.  I found, after a lot of struggling with a hacksaw that heating them up with a heat gun lets you cut through them with a knife with ease.  I cut lengths a bit longer than the total length of the windshields, and then around an inch out lengthways along the pipe.  At the moment they’re a tight fit (especially on the newer Rycote) and require stretching a little to get them on and off, although they seem to work.

Protip: Don’t use the microphones with the drainpipes on.  They’re far from acoustically transparent and quite heavy. 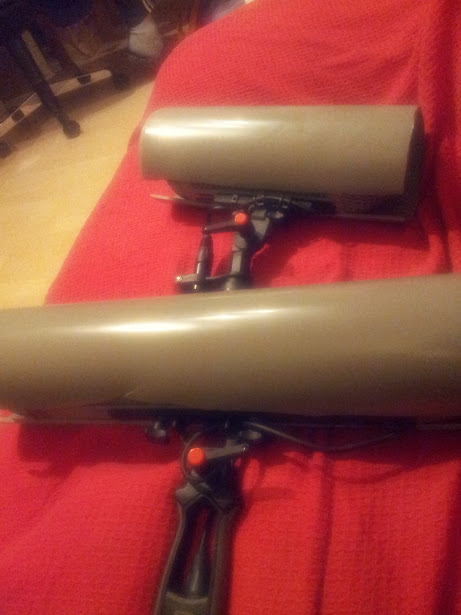