Following on from my computer recording post, from a few months back- I’ve started to put a system together.

I’ve managed to sell all my other computers etc and bought a shiny new Sony Vaio Z (other shortlisted models were the Macbook Air 11″ and the Lenovo Thinkpad x230, based on connectivity, weight, battery power and ability to fit in the bottom of a Petrol PS602 sound bag).

For the interface (based on power, size and connectivity options), the computer was limited to USB.  I’m also a bit wary of firewire interfaces as I’ve managed to blow the controller chip in one, possibly by moving the cable moving a small amount while it was plugged in (or looking at it the wrong way?).  This left me with only 2 options, the RME Fireface UC/UCX and the MOTU Ultralite Mk3 Hybrid (I’d actually discounted this before due to lack of word clock for Timecode sync).

Despite being a long term user of RME interfaces, I couldn’t really justify the price difference for a bit of extra niceness and a word clock input.  MOTU interfaces will (according to their documentation) slave their clocks to incoming timecode on an audio input, so I’m hoping that works.

It actually involved quite a bit of pain getting the MOTU to work with the computer.  I found it’s not currently USB3.0 compatible (all the ports on the computer are USB3.0).  I had to switch them to USB2.0 in the BIOS to get it working.

I also got a control surface, after stumbling across the dodgily named iCON i-controls pro.  It’s probably the most compact control surface with 100mm faders I’ve come across and it runs from DC (and even seems to work without the motorised faders from USB power). It weighs just under 2kg. From having a play, the build seems better than the Euphonix/Avid Artist surfaces.  Was dead easy to set up, seems to talk pretty flawlessly to Samplitude and MOTU Cuemix, although I could do with modifying the setup so that the knobs control trim rather than pan.  Motorised faders are endlessly entertaining (although not to be used during takes).  For some reason Cuemix seems to eat about 10% CPU, which seems a tad excessive.

I’m still short of a few cables to truly make it work as a bag setup (right angled everything for the back of the ultralite, but it fits (with Sonosax mixer providing cabled mic ins and RME Quadmic as pre for radios (may not be necessary). I also need to get a VGA cable to output to the small monitor (may get an HDMI one instead, that one really is bad- ok for checking the frame though), seems a bit of a shame considering the laptop’s screen is 1080p.

Here’s a picture (spot the computer): 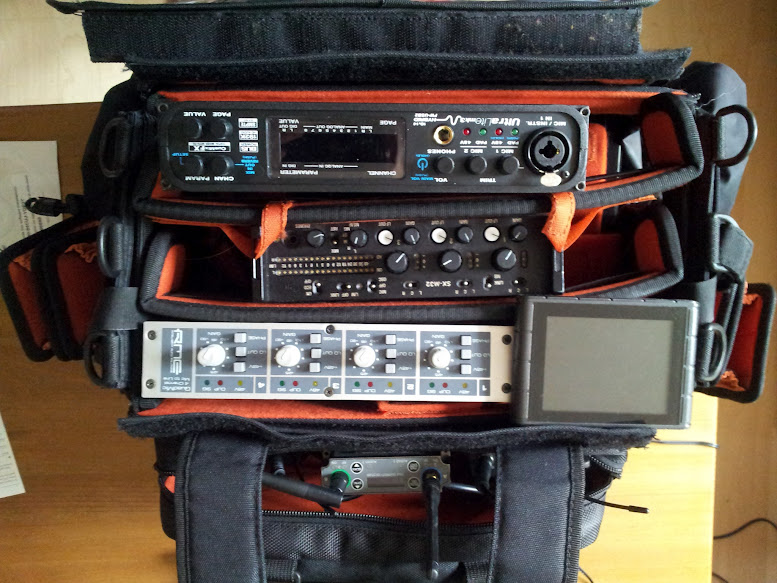 and here’s with the control surface, I’ll need some way of securing it, it just balances on top: 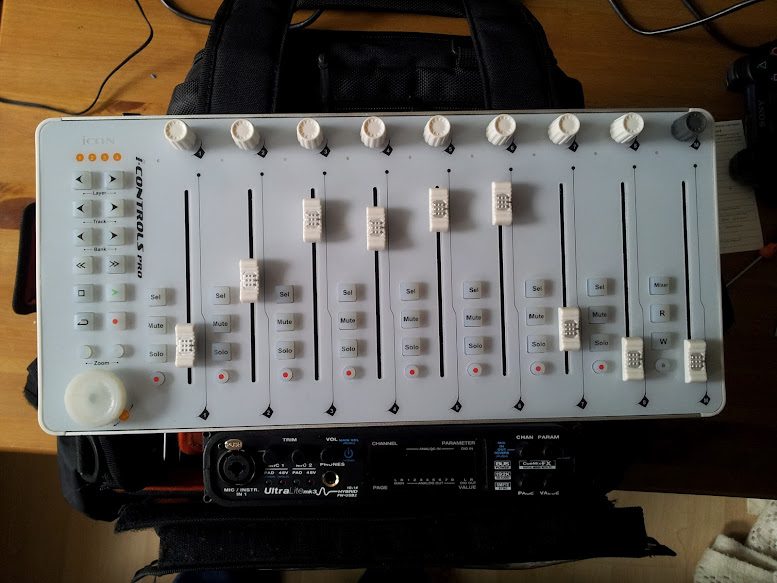