It can be a bit difficult to find commercially available speakers which work off DC or batteries, in fact the only one I know of is the Remote Audio Speakeasy, which isn’t easy to get hold of over here, or cheap.

I normally use a dB technologies L80 if I need to use a speaker, although it’s mains powered only- it’s a 35W amp driving 4ohm speakers and loud enough for most situations. Having taken a look inside, the main transformer outputs 23V, and I’d have to use regulators to get that from my battery power.

After a bit of a rummage around drawers I remembered I had a board for a 25W Tripath 2020 Class-D amp (you can get these off ebay for about £20, and they’re rather good) which ran off 12V.

I’ve got a little Yamaha NS10MM centre speaker, which I normally use as a ‘Grot Box’ monitor which I bought from Hard-Off  (yes, it’s called that, and it’s brilliant) in Japan for about £12 (it still has the label).

I soldered together a few connectors, hooked them up to a 12V Li-Ion pack (another cheapo ebay job) and, as I didn’t have a suitable case for the amp, and the speaker is likely to get chipped, put it all in a camera bag: 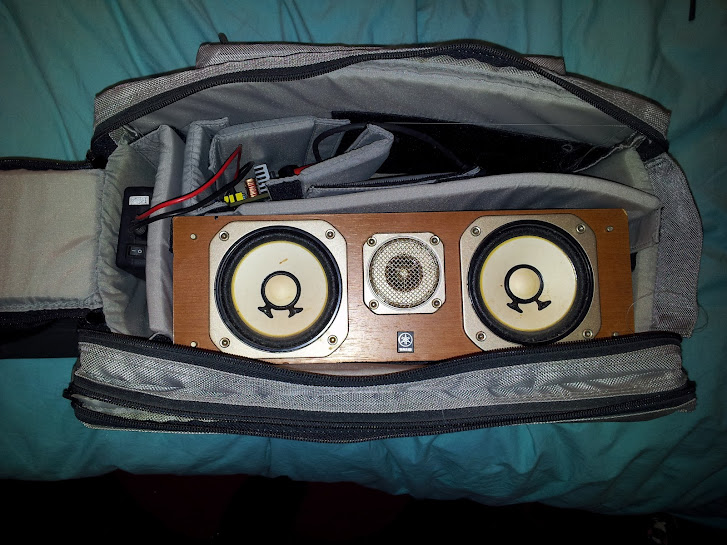 I also found out my passive DI works backwards, so can send balanced line out to this or hook up a wireless receiver to the bag 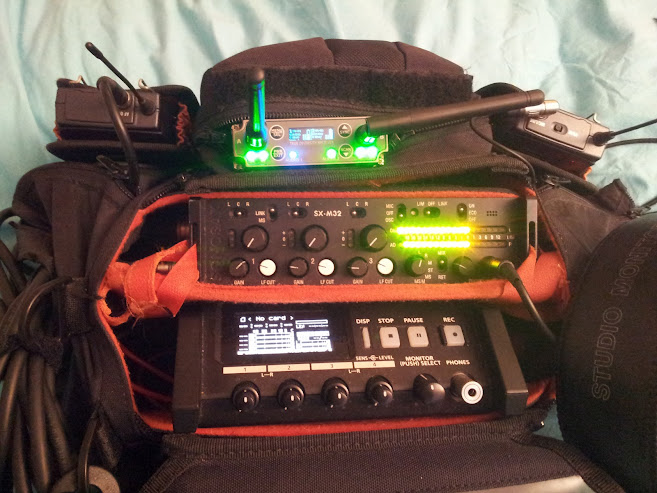 Here’s my bag- every sound recordist’s is a bit different and I thought I’d give you a tour: 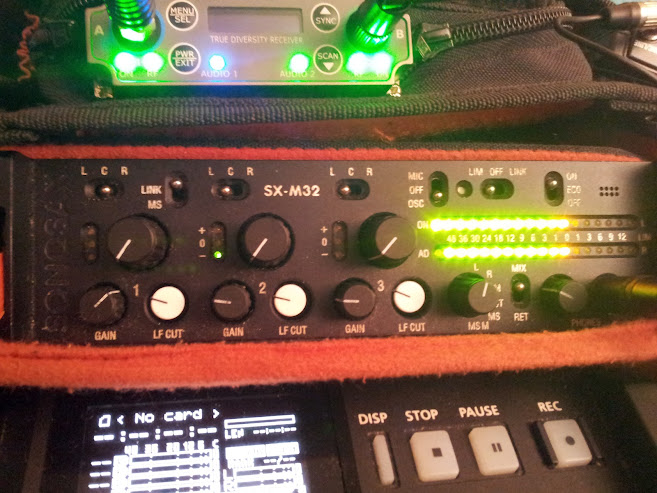 Logically, I’ll start in the middle.  The mixer’s essentially the ‘heart’ of a sound recordist’s kit- with it the recordist can control the level of signals, so that a healthy signal to noise can be maintained but the signal is not distorted.  It also has analogue limiters which will compress the signal during peaks (such as shouting)- this is one of the main differences between mixers built for broadcast and those built for music (in addition to build, powering options and outputs)

Each of the three larger knobs control the level of each signal being sent to the mix, whilst the gain knobs set how much each signal is amplified.  LF cut is a filter which reduces the amount of lower frequencies present in the signal (which can be increased by microphones being placed close to the subject), this can also cut out some noise from the microphone being moved around and wind noise.

It will also power microphones and amplify their signals 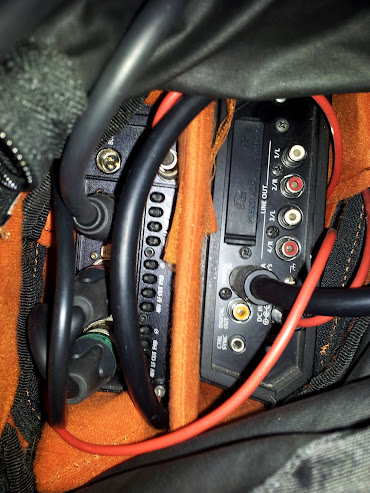 Here’s a view from the left hand side of the bag.  Here the inputs are going into the mixer on the left.  The cable at the top goes to the boom microphone, whilst the cables with red and green bands come from a radio microphone receiver.  The thinner red cables provide power and the black cable going into the recorder on the right comes from the mixer’s digital output 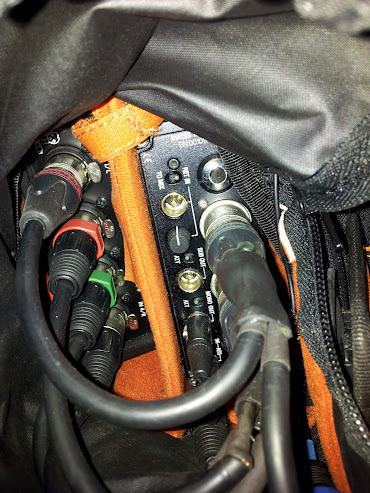 This particular mixer (Sonosax SX-M32) has ‘direct outputs’, which means each of the amplified microphone signals can be sent out before they are mixed.  This can give post production more options. Here the top cable, with the darker red ring sends a mix to the recorder and the other three send pre-fader direct outputs. The smaller ‘mono out’ usually goes to a radio transmitter, sending out a 1 channel mix.  There are also a couple of other connectors out of view which include one for a sending a 2 channels to a camera and receiving one back so that I can hear what is being recorded to camera, when not using a separate recorder, and a smaller one which sends the mix digitally to the recorder.

This is the box at the bottom of the main picture.  Although it is also possible to plug microphones directly into this particular model, the quality and flexibility is not as good as using a separate mixer (there are a few recorders becoming available which can also operate as a mixer).  This one (Edirol R-44) can record 4 channels of audio, as digital .wav files.   Some recorders also have timecode generators which can be synchronised with cameras, making it faster to synchronise video and audio in post production. I also own a 2 channel recorder with timecode facility 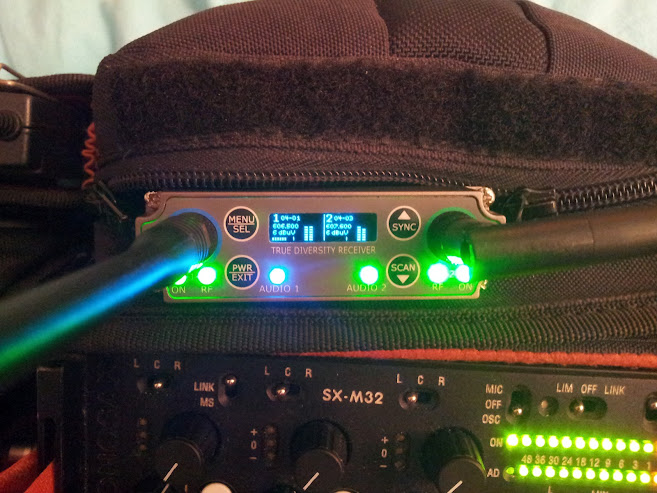 There are a number of situations where it is impossible, or extremely difficult to capture quality audio without using cables.   Although the most expensive and advanced wireless systems are not as high quality or reliable as a cable, they’re close- and allow microphones to be placed where they couldn’t without wires.

This particular box (Wisycom MCR42) actually has 4 receivers inside, 2 per transmiter- selecting the one with the strongest signal.  It also has emulation modes for other brands of receiver (Sennheiser and Audio Limited) and a very wide bandwidth, making it suitable for international use

Radios can also be used for sending signals, such as an feed to a director, boom operator, script supervisor or camera to aid with sync (or to send a timecode signal).  There’s also a transmitter for this purpose on the right and second receiver on the left (single channel) for a third radio mic. 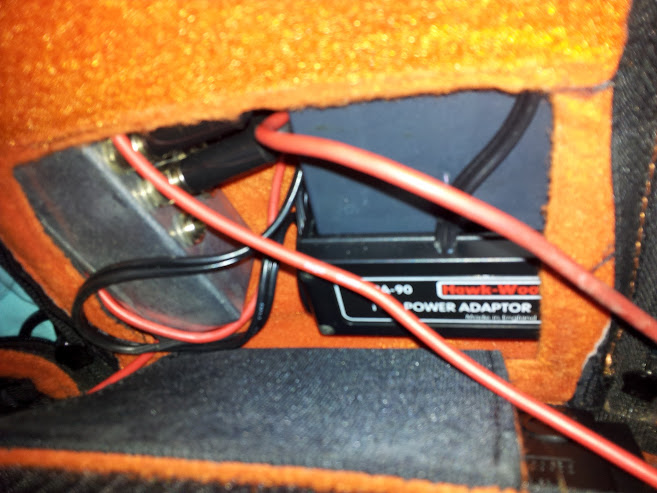 From here the battery power is split between the mixer, recorder and 2 channel radio  receiver.  Here is the whole bag opened up: 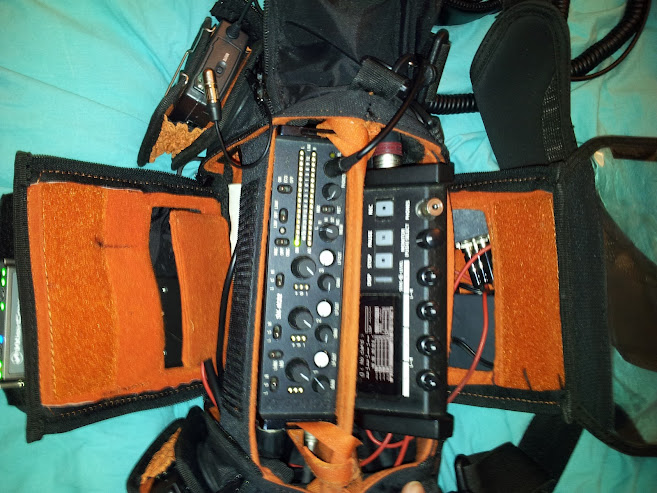 Here you can see the red cables running to the recorder, mixer and radio receiver in the front pouch